Hey, Barack Obama is our nominee, did I mention that? Wow. Have you really taken a second to stop and think about what that means? This is a new era folks, we have to get Barack Obama elected because it will end an era in the United States and we can begin a new one.

(more covers after the break)

You may remember last week when discussing Charlie Crist's lousy health care plan that I proclaimed...

as long as this is the kind of crap that Republicans want to push through as "historic legislation", our country is in for tough times. I don't see any Democrat with the guts and political capital to push through true Universal Health Care coverage here in North Carolina, nor in the US Senate, nor in the US House. They'll fold like a house of cards - just like they did over Iraq.

Well, Howard Dean has now sealed the deal. Dr. Dean has always been more moderate or conservative than most Democrats think of him as being, in Vermont he focused on piecemeal programs like Dr. Dynasaur to provide "near-universal" coverage to children and pregnant women. So, it should come as no surprise when he says....

I think while someday we may end up with a single-payer system, it’s clear that we’re not going to do it all at once, so I think both candidates’ health-care plans are a big step forward. Certainly compared to Senator [John] McCain, who represents a big step backward.

Don McCanne over at Physicians for a National Health Program has a cutting take on what we can expect in the next administration from Democrats.

If Charlie Crist becomes John McCain's VP, you will be hearing a lot about how he brought Universal Health Care to Florida. So, I thought you should know what has happened there. Gov. Crist has accepted a bill, "Cover Florida", that provides low-premium insurance to the state's 3.8 million uninsured. The plan will provide insurance for $150 a month or more. But. Yeah, there is a big, fat, stinking butt in this plan. In exchange for providing this "low-low" insurance cost, the state agreed to wave a set of restrictions on the health insurance companies. What restrictions?

Health insurance companies will offer policies for $150 a month or more, in exchange for an exemption from the 50-plus mandates in current law that require insurers to cover items ranging from bone marrow transplants to acupuncture.

The plans — which aren't the "Cadillac of coverage," as Crist concedes — would cover some health screenings, doctor visits and office surgeries, but not medical attention that requires a specialist or prolonged hospital stays.

Greetings all! Health Care for All NC has begun its short-session "Two Over Ten" push, but this time it is not focused on Verla Insko's "Health Care for All" bill. Instead, this session the push is for House Bill 1897, which creates a Healthcare Policy Council that would make recommendations to the General Assembly on how to integrate public and private healthcare services to form an effective, coordinated system of healthcare for North Carolina.

Don McCanne writes the Quote of the Day over at PHNP, which one of the best quick reads on single-payer and its opponents. It is sent as a almost-daily email update if you are interested. This short video features Dr. McCanne talking about what is wrong with the Presidential Candidates' health care plans, and a Harvard business school professor talking about why she likes them (choice). Dr. McCanne's written comment is available after the break.

The AP is reporting that the universal health care plan put forward by Senators Ron Wyden (D-OR) and Robert Bennett (R-UT) could be operational by 2012 and be budget-neutral by 2014. A budget-neutral item brings in as much revenue as it costs. The kicker to this plan and one of the reasons it has a host of Republicans as co-sponsors is this:

Sen. Ron Wyden, D-Ore., one of the plan's co-sponsors, said the report showed it is possible to provide health care coverage for all Americans — including the estimated 47 million people who are uninsured — without a large tax increase. "We can get everyone in America health care coverage without breaking the bank," he said.

Universal Health Care without tax increases? How is it possible and where is the catch?

For part of 2006, all of 2007 and early 2008 my daily blogging life revolved around getting John Edwards elected President. During that time I did what I could to make it happen, not nearly as much as volunteers like NCDem Amy and Tom P. and not a drop in the bucket compared to the paid staff - Tracy Russo, Aaron Myers and the rest of the crew I got to know while volunteering at the office. When Senator Edwards dropped out of the race it felt like a kick in the groin. It was unexpected, it was painful. To me, John Edwards was really going to be the person that changed the system. I believe in him like people believed in JFK and RFK and as I told my wife "you only get one of these races every lifetime" and for me it wasn't or isn't about Obama it was about John Edwards.
But, he's out. So, after fluttering around for awhile I discovered the second-best candidate running in North Carolina, Dan Besse. Then, finally, I started blogging about the Neal/Hagan race. But, the thrill is gone. I'm all burnt out of candidate fights. I'm burnt out on fighting over he said/she said. I'm going back to issue blogging. At least, for now. So, this is it. This is my final blog on candidates.

J.D. Power and Associates is a name you are probably familiar with from automobile ads, touting their consumer satisfaction and reliability. But, J.D. Power has also undertaken the second of its surveys on consumer satisfaction in the health care industry. Factors studied are: "coverage and benefits; choice of doctors, hospitals and pharmacies; information and communication; approval processes; claims processing; insurance statements; and customer service."

I can't do this post justice, but I just felt I had to write something about this latest study. In the largest study of its kind, it has been found that smoking marijuana has no association with cancer. None. Not even if you are a heavy marijuana smoker. No association. Period.

The new findings "were against our expectations," said Donald Tashkin of the University of California at Los Angeles, a pulmonologist who has studied marijuana for 30 years.
"We hypothesized that there would be a positive association between marijuana use and lung cancer, and that the association would be more positive with heavier use," he said. "What we found instead was no association at all, and even a suggestion of some protective effect."

So, why does smoking pot not cause cancer while tobacco kills more than 440,000 people in the US each year?

The people over at PopPhoto have digitally altered images of the candidates to show us what they'll look like at the end of their first term. Being President is hard work, just ask young George Bush. 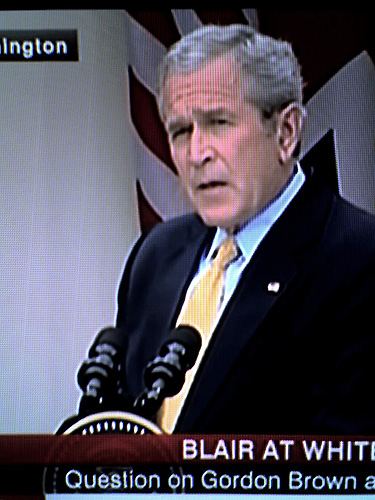 See your Presidential Candidates in the future, below the fold.